Raritan Valley Community College has earned a “gold seal” in the 2019 ALL IN Challenge Awards for its student voter engagement. The awards recognize colleges and universities across the country that are committed to increasing college student voting rates. Institutions that earn a gold seal have achieved a student voting rate between 40-49 percent.

RVCC was among the schools recognized at the ALL IN Challenge Awards Ceremony, held November 12 at the Newseum in Washington, DC.

According to the National Study of Learning, Voting, and Engagement (NSLVE), an initiative of Tufts University’s Institute for Democracy & Higher Education, voter turnout at the more than 1,000 institutions participating in the study increased by 21 points, from 19 to 40 percent, from the 2014 to 2018 elections. RVCC’s student voting rates increased from 14.4 to 41.4 percent during that period. The biggest increase in numbers of voters at RVCC occurred in students ages 18-21, with a 32.1 percent increase.

“RVCC is proud to be recognized nationally by the ALL IN Challenge Awards for our student voting engagement efforts. The College’s faculty, staff, and students are committed to working together to reduce apathy, increase engagement, and graduate civic-minded students prepared to solve the country, and the world’s, most pressing challenges,” said Dr. Michael J. McDonough, president of Raritan Valley Community College.

“We are excited to honor Raritan Valley Community College with an ALL IN Challenge gold seal in recognition of their intentional efforts to increase democratic engagement and full voter participation,” said Jennifer Domagal-Goldman, executive director of the ALL IN Campus Democracy Challenge. “More institutions like RVCC are changing culture on campus by institutionalizing nonpartisan democratic engagement efforts that are resulting in the incredible student voter turnout rates that we’ve seen across the country.”

RVCC students’ increased engagement in the voting process was fostered by a $1,850 mini-grant to participate in “Engage the Elections: 2018,” a project that aimed to advance non-partisan electoral engagement on community college campuses. The project was part of Campus Compact’s new program, Community Colleges for Democracy. RVCC was one of only 14 community colleges in the country—and the only New Jersey college—to be awarded the mini-grant.

Led at RVCC by Service Learning and Student Life, the College’s participation in the Engage the Elections project (#RVotes Matter) was a huge success, with 138 voter registrations completed. The initiative featured a number of events on campus, including a “Puppies, Pizza and Politics” gathering led by an immigration attorney, and workshops by Dr. Elizabeth Matto, Director of Rutgers University Eagleton Institute on Politics, and “Your Story, Your Rights, Your Vote: What’s Next,” presented by PlatformWomen.org.

The ALL IN Campus Democracy Challenge is a nonpartisan, national initiative recognizing and supporting campuses as they work to increase nonpartisan democratic engagement and full student voter participation. The Challenge encourages higher education institutions to help students form the habits of active and informed citizenship, and make democratic participation a core value on their campus. More than 560 campuses, enrolling more than 6.2 million students, have joined the Challenge since its launch in summer 2016. 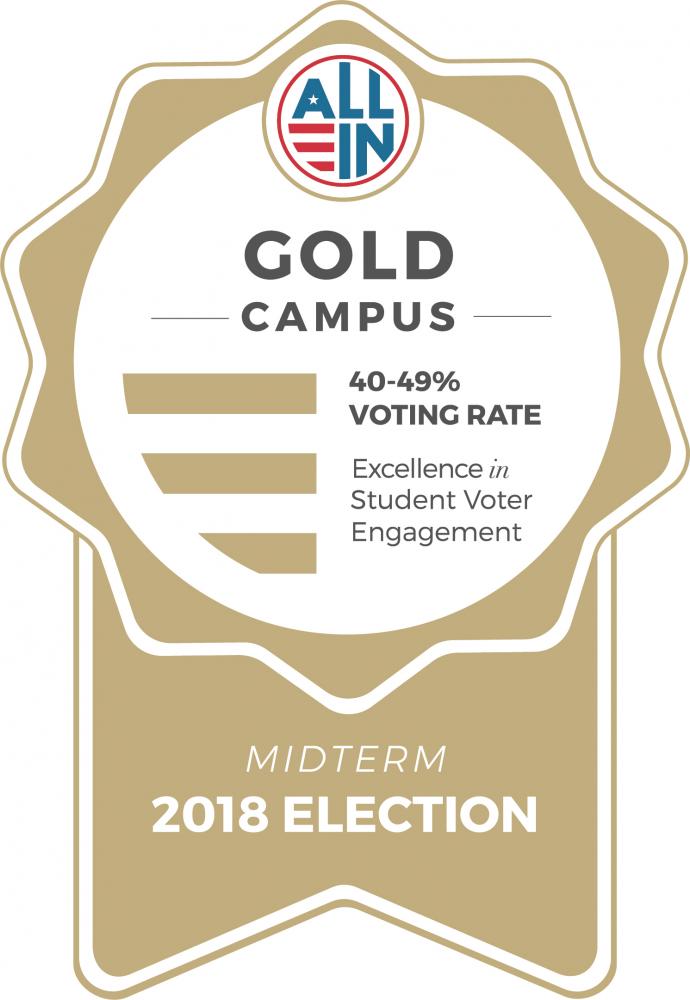