The College also was honored in the New Jersey Campus Voting Challenge for the Highest Voter Registration for two-year colleges and the Highest Voter Turnout and the Most Improved Voter Turnout for two-year colleges. The voting participation was based on the 2020 election. The College had a 62% voting rate, which was an increase of 16.6% from 2016. RVCC’s voting successes earned the College a Silver Seal (60-70% student voter turnout) from the ALL IN Campus Democracy Challenge.

The Voting Challenges awards were presented at the State Voting Challenges Awards Ceremony, held virtually on November 9. During the event, RVCC was recognized for its efforts in civic engagement in all the categories by New Jersey Secretary of State Tahesha Way.

The New Jersey Campus Voting Challenge is a nonpartisan competition among NJ higher education institutions, focusing on their commitment to increasing student voter participation and engagement on campuses across the state.

“Working to increase students’ awareness of the political process, especially voter registration and voting, is the main goal of RVCC’s action plan. Educating our student voters to make informed decisions when they vote is critical to the functioning of our democracy,” said Lori Moog, RVCC’s Director of Service Learning and Community Outreach. “Through the continued work by the administration, student organizations, and the Service Learning Program, the College is able to foster an environment that supports student civic activism and democratic engagement on campus and in the community,” Moog continued.

RVCC’s voting initiatives are part of a Student Government Association (SGA) civic campaign, “RVotes Matter,” focusing on voter registration, voter education, and voter participation. While students were schooling from home during the pandemic, SGA held several online programs and campaigns to increase civic engagement. This included “Puppies & Politics,” a weekly conversation about political issues that encouraged students to share their pets with viewers, as well as a social media campaign featuring students dropping their mail-in ballots in ballot boxes. The RVotes Matter Campaign was chaired by Gerardo Carcamo of Branchburg, who graduated from RVCC in May with a degree in General Business. He is now pursuing a Bachelor’s Degree at Rutgers University.

RVCC’s ALL IN Challenge Action Plan formalizes the College’s commitment to:

●    Helping students develop civic literacy, as well as self-awareness as citizens
●    Promoting service activities for college students to become democratically engaged in political processes
●    Enhancing dialogues about issues affecting students, the community, and the world
●    Providing opportunities for students to effect positive change in their communities through knowledge, advocacy, and action

This is not the first time RVCC has been recognized for student voter engagement. A recent report from the Institute for Democracy & Higher Education (IDHE), creators of the National Study of Learning, Voting, and Engagement, or NSLVE, also highlighted RVCC’s student voting increase of 16.6 percent from 2016 to 2020.

In addition, Raritan Valley Community College was included in Washington Monthly’s 2021 Best Colleges for Student Voting Honor Roll. RVCC was one of eight community colleges that made the list out of 205 colleges nationally.

The New Jersey Campus Voting Challenge is part of the ALL IN Campus Democracy Challenge, a national, nonpartisan nonprofit that works in partnership with numerous local and national nonpartisan organizations in the Student Learn Students Vote coalition, which has more than 400 members. Awards are based on campuses' National Study of Learning, Voting, and Engagement (NSLVE) reports generated by the Institute for Democracy & Higher Education at Tufts University in Massachusetts.

Ranked by WalletHub.com, Intelligent.com and Niche.com as the #1 community college in New Jersey, Raritan Valley Community College has been serving as an academic and cultural center for Somerset and Hunterdon County residents for over 50 years. The College has been nationally recognized for its service to the community, environmental stewardship, and commitment to diversity. It is home to  a Planetarium, Science Education Institute, and an Honors College for high achieving students. 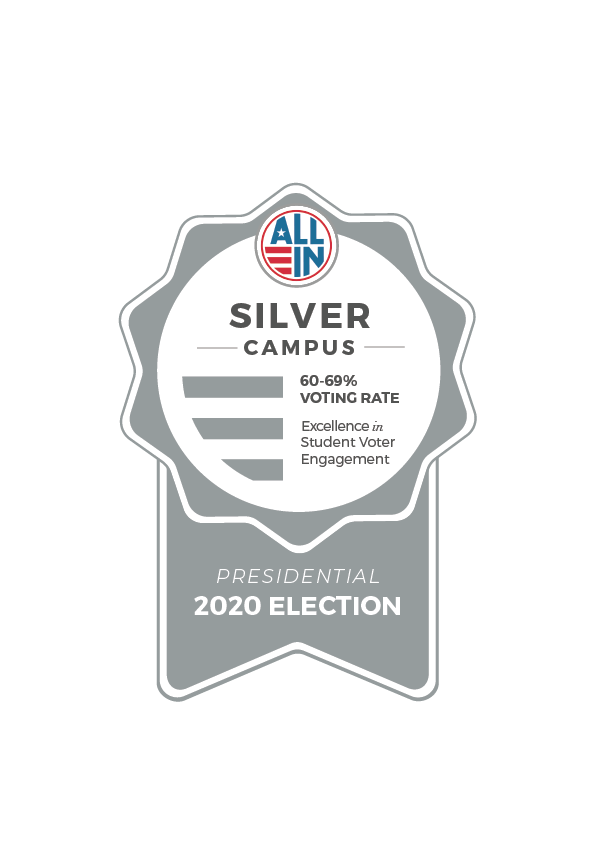